It all started last summer, while drinking beer with my friends I mentioned a great way to travel using Airbnb and also a cheap one. It took a few months until we actually settled on Krakow as the destination. In the months to come my friends did most of the work, finding a great apartment near the city center, the van we were going to rent and other details. It seemed like the day would never come and that we would never go to Poland and now when it’s over it’s like it passed in a second.

Before I tell you all about the trip, if you’re travelling and looking for a cheap place to stay I recommend using Airbnb, here you can find a discount!

So in the photo above you can see me and my friends at the start of our trip, as I said we decided to rent a van and travel across four countries to get to Krakow. Road trip is the best way to travel, you can play the music you want, hang out with friends, stop whenever you want and have a great time.

We traveled during the night and got there in the morning. It was raining a bit and colder than expected but it didn’t stop us. As we had to wait to get into our apartment we decided to go to the city center and explore it a bit. It was the first time in Krakow for all of us so we walked in a group looking at our phones finding our way through the city. As we got to the main square we were surprised with the size of it. Probably one of the biggest squares in Europe.

We continued through old streets of Krakow filled with shops and cafes to get to the Krakow Galeria shopping center where we could browse through stores, grab a bite and something to drink. The shopping center is well worth seeing with all the well-known brands and if you go from the city center you will pass the amazing & historic gates to the city.

After grabbing a bite there is nothing better than drinking beer. It was so hard to find a bar or a pub before noon to have a beer, don’t know if that’s crazy for you but it’s not rare for us in Croatia to grab a beer any time of the day. We love our beer! Finally we stumbled upon Bania Luka right next to the city center, and I was so glad that we did. They have great & delicious beer for only 1 €!! And they have crazy tasty shots for the same price.

We settled in and left our stuff after check in at the apartment and after dinner returned to Bania Luka for a night out. The prices were so low that I can’t even count how many shots I had, we met people from UK, Germany and Poland there and had the best time.

I woke up the next day after partying the whole night, meeting new people and coming home alive thanks to my friend who I almost got lost with. We decided to go to a restaurant for lunch before exploring the city further.

Passing the bridge that was on our way to the city center we had a chance to take a photo of the castle from a different angle. And right next to the castle there was a restaurant we found using Tripadvisor. This was my favorite restaurant in Krakow, decorated traditionally with delicious food and HUGE portions, not to mention that it was really cheap.

I ordered different grilled meat with a side dish of potatoes and rice and two kinds of cabbage. This way I could try a bit of everything and of course 1 l of their Tyskie beer. Their sausages and liver were okay, but I had better. I was surprised with the steak, chicken and pork and how juicy and well grilled they were. The rice was also a bit dry, but all in all the portion itself was really large so I was full probably already when there was still half left, the beer was amazing and the whole experience was fantastic.

After having an awesome lunch my friend decided to visit the castle near by while I decided to take a power nap at the apartment but ended up drinking wine with a friend.

After drinking wine me and my friend went to meet up with the others at the city. We decided to go to a Bar Krawl that night. Have to say we were disappointed, not only that the drinks were watered down, but the guides didn’t even say hello to us, just took our money and told us where we were going. After meeting a lot of people from UK and barely any from Poland we decided to return to the bar  where we spent the night before. My friends and I had beers a few shots and had a great time that night in Krakow – the city with so many potentials and it’s up to you to loosen up, let yourself go and have a great time! 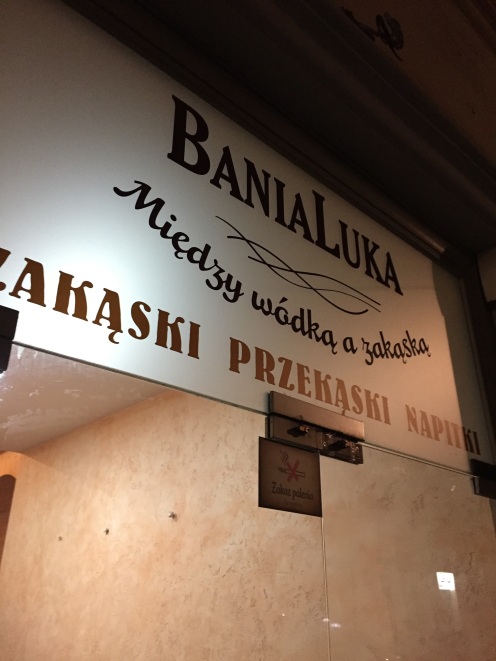 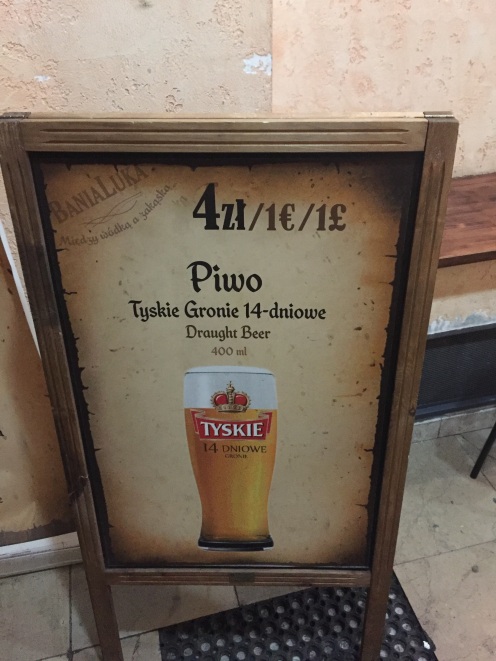